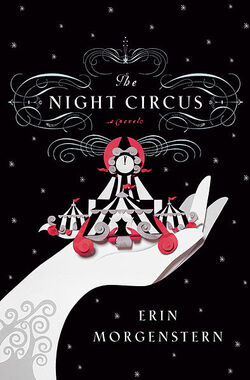 The Night Cirus is a fantasy novel that was published in September 2011. It is the debut novel of writer Erin Morgenstern and tells a tale of magic and romance set in an ahistorical late 19th century. It was not intended specifically for young adults, but has been recommended for teens.

The first printing runs to 175,000, and the rights have been sold in 30 countries; Summit Entertainment has contracted the film rights. Jim Dale, who narrates the Harry Potter audiobooks, also narrates the audiobook of The Night Circus. In 2012, the novel won an Alex Award from the American Library Association.

The Night Circus is a phantasmagorical fairy tale set near an ahistorical Victorian London in a wandering magical circus that is open only from sunset to sunrise. Le Cirque des Rêves, the Circus of Dreams, features such wonders and "ethereal enigmas" as a blooming garden made all of ice, acrobats soaring without a net, and a vertical cloud maze where patrons who get lost simply step off and float gently to the floor. The circus has no set schedule, appearing without warning and leaving without notice; they travel in a train disguised as an ordinary coal transport. A network of devoted fans styling themselves "rêveurs" ("dreamers") develops around the circus; they identify each other by adding a splash of red to garb that otherwise matches the characteristic black and white of the circus tents. The magical nature of the circus is occluded under the guise of legerdemain; the illusionist truly transforms her jacket into a raven and the fortune teller truly reads the uncertain future, and both are applauded for their ingenuity.

The circus serves a darker purpose beyond entertainment and profit. The magicians Prospero the Enchanter and the enigmatic Mr. A.H- groom their young proteges, Celia Bowen and Marco Alisdair, to proxy their rivalry with the exhibits as a stage. Prospero teaches his daughter to hone her innate talents by holding ever larger and more complex magical workings in her mind. Celia takes her position on the game board as the illusionist who makes true transformations, adding tents and maintaining wondrous aspects from the inside. Mr. A.H— trains his orphan ward with books in the ways of glyphs and sympathetic magic and illusory worlds that exist only in the mind of the beholder. Marco takes a position as majordomo to the producer of the circus; he works from the outside in, connected to the circus but not a part of it. The two beguile the circus goers and each other with nightly wonders, soon falling in love despite being magically bound to a deadly competition with rules neither understands; the magical courtship strains the fate laid out for them and endangers the circus that has touched the lives of so many and cannot survive without the talents of both players.

Start a Discussion Discussions about The Night Circus (Novel)